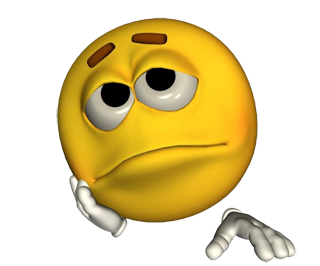 The leak is still not repaired, so the studio remains closed. More so, since my previous news message on July 3, 2013, there was no progress at all. Therefore I had no choice but to give my lawyer the command to unlock the situation, if necessary through judicial means.

But there was also good news in recent weeks, including the purchase and installation of the new studio drum kit: 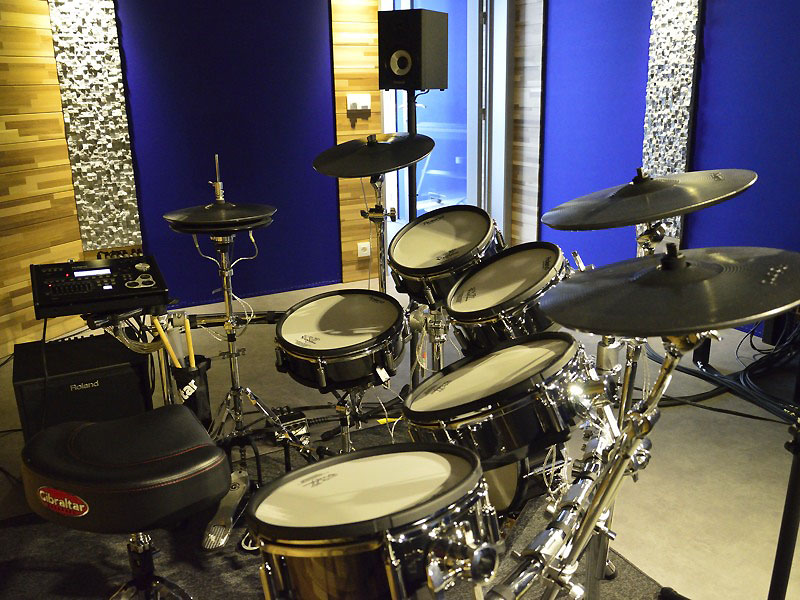 This drum kit is the top-of-the-line model from the legendary Roland V-Drums Pro Series and is praised for it's realistic playability and unmatched sound quality of the built-in drum sounds. And if that is not enough, it can also be used as a MIDI drum trigger for software drum samplers. It is possible to simultaneously record in Pro Tools HD the sound of one of the many drum kits in the TD-30KV through eight separate outputs along with the electronic MIDI data generated by the Roland TD-30 drum module. This MIDI data can be assigned to SUPERIOR DRUMMER 2, the flagship software drum samplers with many more available drum kits.

Overall, in 95% of cases it is possible to play and record live the perfect drum track for your recordings. If necessary you can correct the recording afterwards, both in terms of performance errors and in terms of the choice of drum sounds. Do you want to know what this drum kit can do, please go to Youtube and type as the top search term 'Roland TD-30KV' and you will probably be amazed about what you will see and hear...

Btw, I also bought the Roland CM-220 CUBE Monitor - 2.1 Monitor System for Electronic Instruments. This is a 200 watt subwoofer and two 60 watt sattelite speakers, specially designed for the high dynamic range of electronic musical instruments. It presents a very realistic drum sound in the recording room including a correct stereo imaging. So it is not necessarily required to play the drums with headphones, now it can sound just as loud like a standard drum kit, or, if needed, much much louder .The speakers can also be used to give a bit more power when using headphones (for example just the subwoofer so you can feel the kick). For your information: all extra drum hardware is made by Gibraltar, including a Gibraltar 6611DB Avenger II double bassdrum pedal for heavier rock drumming.

I have the drum kit in the studio for 6 weeks now and I play it every day at least one hour, simply because it is so much fun to do so and the sound possibilities are so extensive. So maybe I will end up as DRUMMER after all :-)

+ the purchase of a studio guitar amplifier: 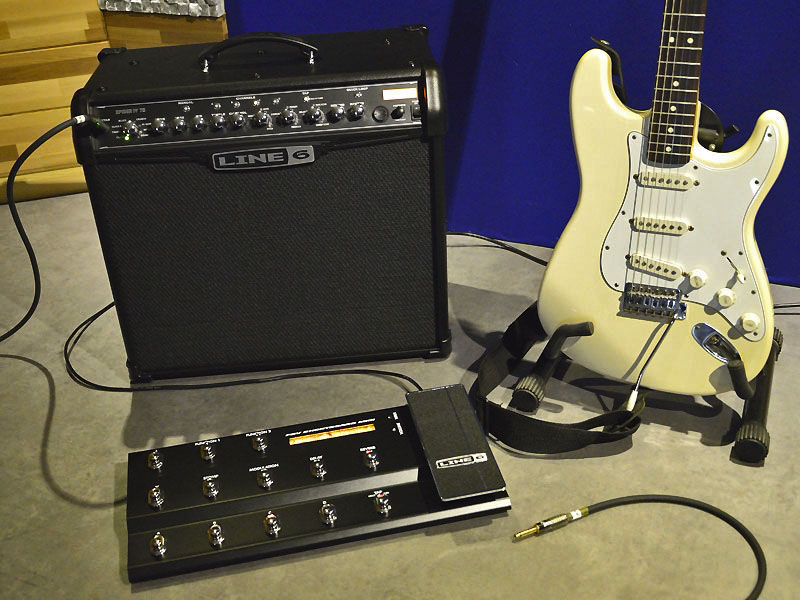 I'm not a guitar player and have never played guitar, but I think that a recording studio should be able to offer a high quality setup for electric guitar players. The guitar on the picture above I have it for many years, it's a Fender Stratocaster from 1996. I also work with Guitar Amp Simulation plug-ins for many years, mainly from LINE 6, so choosing a LINE 6 Spider IV was a logical choice for me. It simulates 16 different guitar amps + 20 different guitar pedal effects, which ensures you can cover almost any musical genre. Moreover, there is a reason why it is the best selling guitar amp in the USA + over 1 million copies sold worldwide.

Of course you can put microphones in front of it and record the sound in the traditional way, but I prefer also record the guitar signal from the LINE 6 Spider IV himself. I also split the clean signal coming from the electric guitar itself with a DI box and record it simultaneously. So this clean recording can always be used with Guitar Amp Simulation plug-ins in Pro Tools HD. This ensures that afterwards still a totally different guitar sound can be made, or even be 're-amped' with plain guitar amps (the clean recorded  signal is sent to a guitar amplifier and is recorded back simultaneously with microphones).

But the main idea is that a guitar player now can play, if necessary without headphones, and a decent guitar sound from a guitar amplifier is heard just as the guitar player is used to hear. This in contrast with working with Guitar Amp Simulation plug-ins in Pro Tools HD, where the guitar sound can only be heard through headphones or through the Control Room speakers.

I'm already playing a few weeks on this guitar amplifier and it is very nice to hear so many different guitar sounds coming from one guitar amplifier. But probably I will never become a real guitarist, for that I'm too much of a keyboard player.  A piano keyboard is logical for me, a guitar neck is rather chaotic :-)

And the purchase of the following studio material: 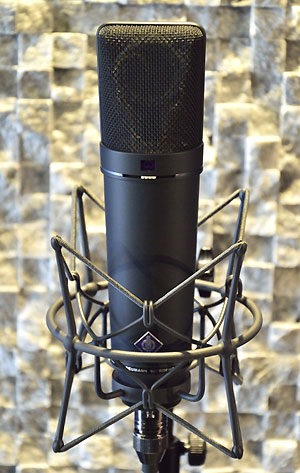 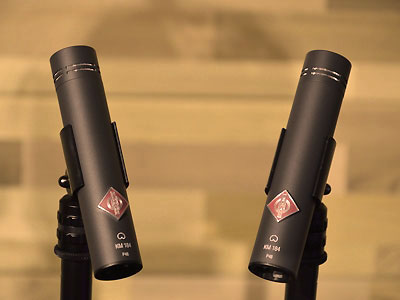 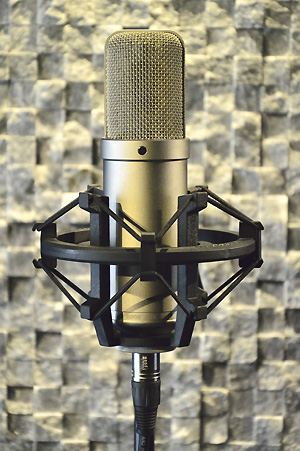 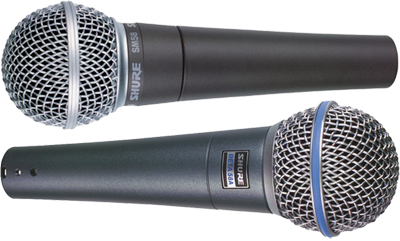 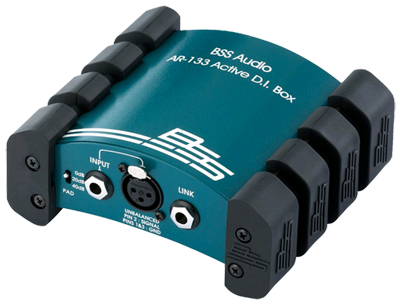 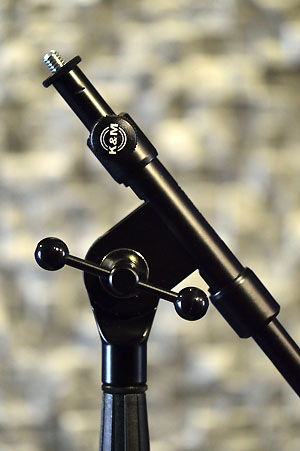 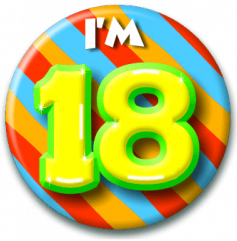 On July 03 1995 I founded 'Delta Music - Midi Studio & Music Composing' in Mortsel. Today we are 18 years later and I start with a clean slate and a new studio in the beautiful and peaceful Sint-Truiden.

The name has been changed several times over the years, 'Delta Music' remained a constant, the suffix changed with the times. Since 2013, the official name is 'Delta Music Belgium • Pro Tools | HDX Studio'

With a refreshed graphic design, a much more user-friendly menu structure and newly written texts.

Also in the background some things changed, the site contains no more Flash animations and Flash buttons, so the site works well on Apple iPhone and iPad now + the site is much faster. The site is now completely dynamic and is therefore usable on all screen sizes, from a small smart phone to a Full HD TV with a resolution of 1920 x 1080 pixels.

And I really could not avoid it: we were already present on MySpace, Delta Music Belgium is now also present on Facebook, Twitter, LinkedIn and Google+

But... the studio remains temporarily closed...

Sadly enough there is one thing I cannot announce today and that is the opening of the new studio...

I'm not a part of the problem, because the studio is ready for many months now, except for a few aesthetic details. Originally it was my intention to open the studio on October 1, 2012, but this proved to be impossible, the cause is a very small hole with very serious consequences ...

This is obviously not a workable situation and therefore I have no other choice than keeping the studio closed until the leak will be repaired. I can never guarantee that a studio session will not be canceled because it rained a bit too much and I need to hold an umbrella above my head for mixing + obviously the combination of water and electricity is a dangerous situation in itself...

Here are two pictures of the seepage of water through the stretch ceiling in the Pro Tools | HDX Control Room:

1) the situation on August 27, 2012, the first clear picture of the seepage in full action, just after a thunderstorm, the stretch ceiling was placed three weeks earlier and therefore brand new: 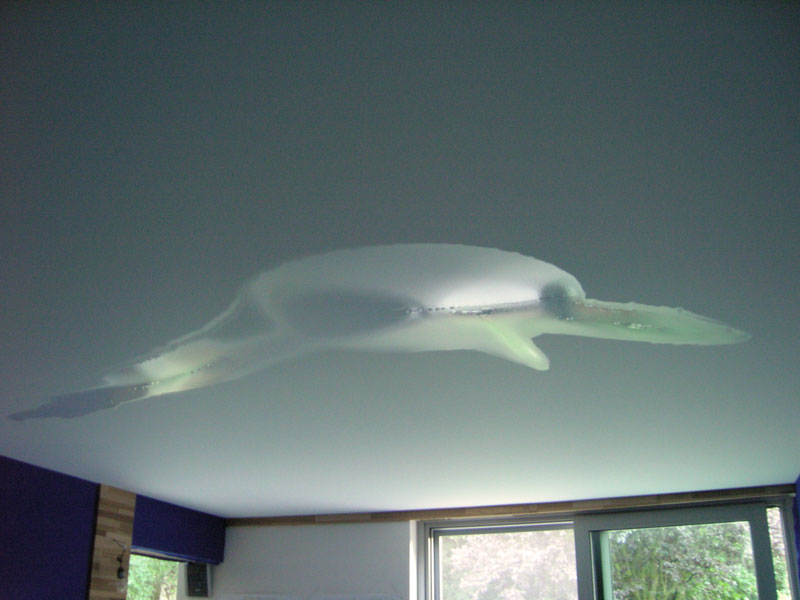 2) the situation on June 20, 2013, almost 10 months later, one day after a thunderstorm, the central water accumulation has almost been seeped through the ceiling, but it will still take a day until everything is completely dry. The spots and circles are sad reminders of the many previous seepages: 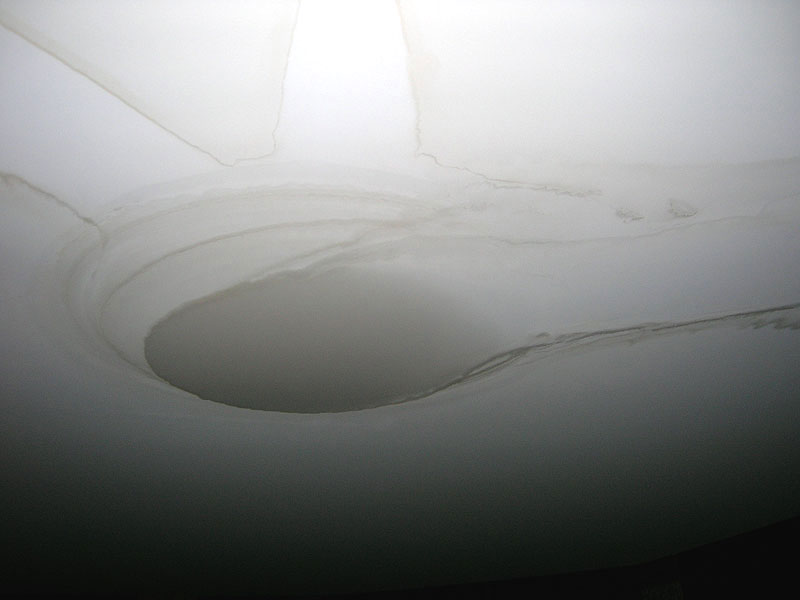 It has been an enormous hassle with the architect, the contractor, architectural expert and the experts from the insurance companies. Since the discovery of the leak on August 9, 2012 It eventually took over nine months before the honourable gentlemen agreed on the fact that the leak was a result of a manufacturing defect in the shell and that the insurance of the contractor agrees to cover all damages and costs. But it is still waiting for the administrative settlement of the case before the contractor obtains permission from his insurance company to fix the construction error.

But I am convinced that the problem will get solved eventually, I can just still not guarantee when this will be.

Further planning is therefore as follows:

1) once the leak is repaired the studio will open. The damaged stretch ceilings will not be replaced yet because it has yet to be seen whether the problem was really fixed. If the leak is still present, then it may be required to close the studio again. This depends on the size of the remaining seepage and to what extent this makes it impossible to work in the studio

2) if there is sufficient proof the leak is actually repaired, only then I will have the damaged stretch ceilings replaced. Then Delta Music Belgium will be closed for 1 to 2 weeks. It may be the case that I want to be on the safe side and wait a year to have them replaced, but just to be completely sure that there are no leaks anymore

What strikes me most about this situation is that the past year many promises were made to me and even more were broken, each time the problem would be definitely solved by the end of the month , each time they would do everything possible. Many months have passed and I'm still waiting ... For me correctness and honesty always has been of the utmost importance, today I have to come to the conclusion that my humble principles apparently are becoming rare today.

In any case, the only thing I can do now is to keep waiting and inform my clients correctly about the state of affairs, what have I done today.

I hope to come back here very soon with the news that the leak is repaired and the studio finally opens its doors! 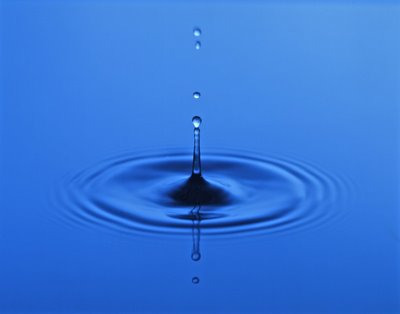 PS: as long as the leak is not repaired, it also remains dripping on the news pages. I could have inserted a stop button below to stop the sound of the falling drop , but let the dripping get on your nerves, just as it is here :-)